Sonar is essential for robots and self-driving cars as it is a very cost-effective sensor for distance measurements, but sonar also has some limitations. Sometimes sonar measurements can be misleading and there were no sonar signs or signals so far, which could assist sonar navigation. But researchers from FAU, University of Antwerp and Vrije Universiteit Amsterdam have come up with a solution, inspired by a special coevolution between bats and flowers.

Sonar sensors play an important role in new technologies, such as navigation systems in robots, self-driving cars and other technical applications. The sensors are inexpensive, energy efficient, and usually provide very accurate measurements. “However, they also have some drawbacks,” says Prof. Stefan Rupitsch from the Chair of Sensor Technology of the FAU “Their measurements can be unclear, and this can cause misleading situations for an autonomously controlled vehicle.”

In a project at the FAU funded by the Volkswagen Foundation, the engineer Prof. Dr. Stefan J. Rupitsch and the Biologist and bat researcher Dr. Ralph Simon, Vrije Universiteit Amsterdam, together with Jan Steckel from Antwerp University, went in search of a solution. They ended up finding one in flowers that depend on bats for pollination services. Their findings are now published in the scientific journal PNAS. 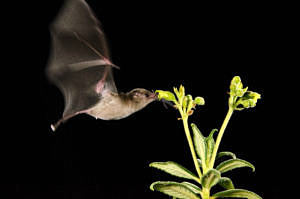 Some bat species feed on the nectar of flowers. That is why some bat-pollinated plants have developed special flower parts to help bats find them. (Picture: Ralph Simon/Vrije Universiteit Amsterdam)

“Bats navigate by way of echolocation,” Simon explains. “They can locate objects by emitting sounds and listening to the echoes picked up by their ears. It’s an ingenious way of sensing the world, and it works great. But sometimes things become difficult, for example when a bat’s food source is very close to vegetation. And yet, there are even species of bats that feed on flower nectar, so they obviously have to fly very close to plants and search for flowers.”

Leave it to natural selection to come up with a solution: some bat-pollinated plants have developed special floral parts that act as sonar reflectors, making the plants stand out in the bats’ acoustic landscape, helping them find their way.

The international and interdisciplinary team of researchers had the idea to develop artificial sonar signs inspired by these acoustic reflective floral parts to guide robots and driverless cars through unfamiliar environments. They developed special bat-inspired sonar systems and floral inspired sonar reflectors. “We were amazed how reliable these reflectors were detected even within clutter rich surroundings” Simon says. The researchers could demonstrate that these artificial reflectors can improve the navigation efficiency of a sonar-guided robotic system they were even able to transmit different commands with different reflector forms, making the bio-inspired reflectors to perfect sonar traffic signs. “Bioinspired sonar signs can be very efficient tools, opening doors for new applications of sonar sensors and a safer autonomous navigation” Prof. Steckel, University of Antwerp, concludes.