Coming home to roost with mum

Coming home to roost with mum

For the first time, scientists are able to evaluate the social behaviour of bats in the wild without interruption

Biologists are using miniaturised tracking sensors to investigate maternal care in bat colonies. Scientists from a research group of the German Research Foundation (DFG), coordinated by FAU, equipped mother bats and their offspring with sensors to record contacts between the animals automatically. ‘For the first time, we were able to use this technology to prove that mother bats accompany their young to new roosts. Before, researchers used to carry aerials and follow the bats equipped with transmitters either by foot or in a vehicle. This often led to significant gaps in the recordings. The lack of spatial resolution was not suitable to interpret social interaction between individual bats,’ says Dr. Simon Ripperger from the Natural History Museum – Leibniz Institute for Evolution and Biodiversity Science in Berlin. The researchers have recently published their findings in Biology Letters.

Many species of bats from temperate zones display remarkable social behaviour. The females return to their birthplace year after year. The juvenile bats have to learn to hunt and find a roost by themselves. The learning processes involved have remained a mystery until now, as it is extremely difficult to observe bats in the wild. In order to research social behaviour in the wild, the research group ‘Dynamically adaptive applications for bat localisation using embedded communicating sensor systems’ developed a fully automated radio-based sensor network to be able to observe the small creatures. 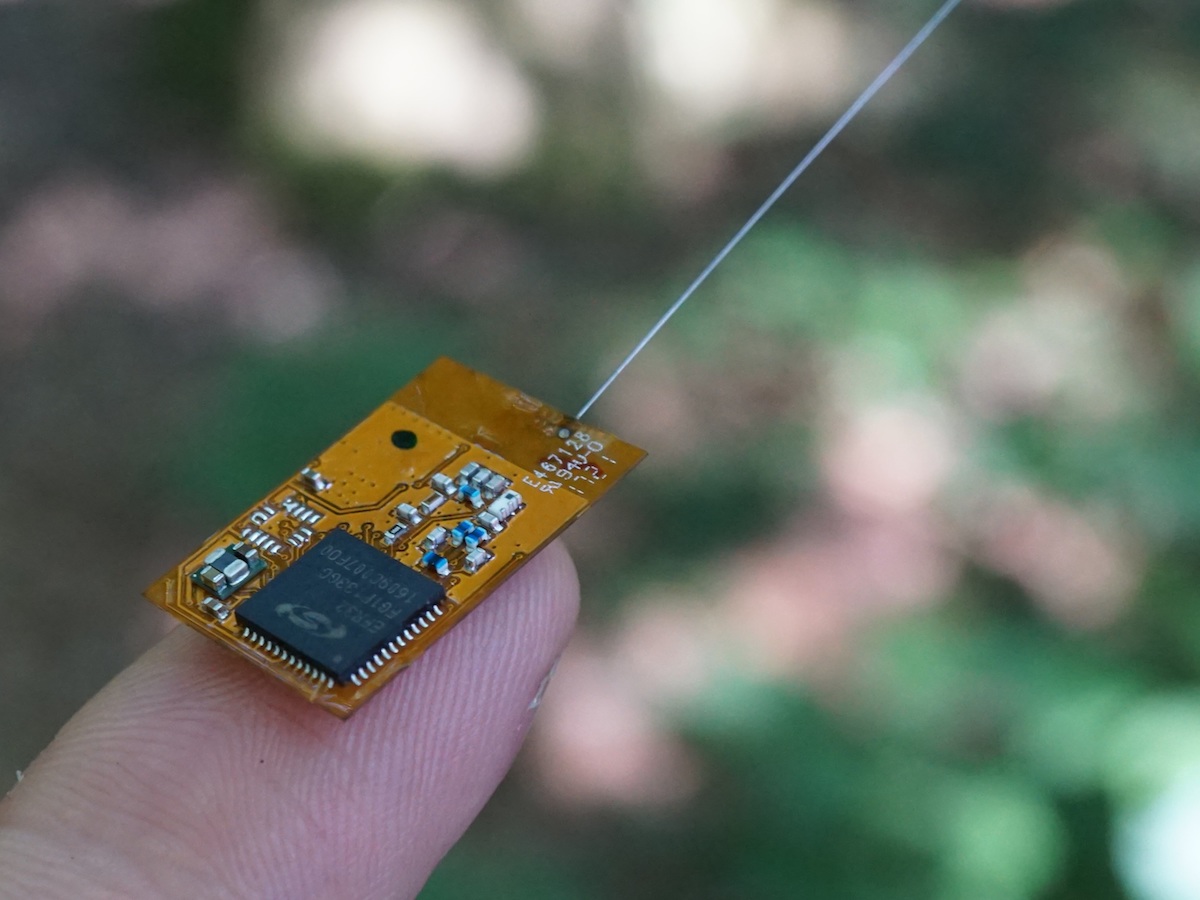 The tracking sensor used by the DFG research group is so small that it fits on the tip of your finger. (Image: Simon Ripperger)

Sensors which weigh only half as much as a one cent coin were used to record contacts between individual bats and observe the group dynamics of juveniles during their nightly foraging and whilst changing roosts. ‘As we didn’t want to affect the bats’ flight, it was important that the sensors weighed as little as possible – no more than one or two grammes including batteries, circuit board and aerial – and were shaped so that they didn’t restrict the bats in their natural movements,’ explains Prof. Dr. Alexander Kölpin from Brandenburg University of Technology Cottbus-Senftenberg. ‘That was a major challenge when designing such a complex system. The aerial had to be shortened significantly and the node adjusted to fit the bat’s body in 3D. We also had to bear aerodynamics in mind. Once we succeeded in achieving the basic function of the mobile sensor node, we added further functions one after another in order to be able to record all the important data without burdening the bat with too heavy a weight.’

The result is a lightweight, miniaturised wireless sensor node with a localisation and communication interface for use on a bat in flight. In order to maximise battery life and increase the module’s energy efficiency, the researchers investigated energy-efficient transmission protocols.

Close contacts between mothers and juveniles whilst changing roosts but not whilst foraging indicate that the mothers actually guide their young to new roosts. It has long been suspected that bats behave in this way, but this unusual behaviour was not able to be observed until the technological innovations of the research group made it possible.

Friedrich-Alexander-Universität Erlangen-Nürnberg (group coordinator), Brandenburg University of Technology Cottbus-Senftenberg, Paderborn University, Natural History Museum – Leibniz Institute for Evolution and Biodiversity Science in Berlin and Technische Universität Braunschweig are all working together as part of the DFG research group FOR1508, ‘Dynamically adaptive applications for bat localisation using embedded communicating sensor systems’. ‘At first, we were met with scepticism in view of the considerable challenges posed by our proposal. I am all the more pleased that the research group was able to deliver such convincing results in all areas – and I am sure that more results will still come, as a field test in Panama is still to be completed,’ commented the coordinator of the research group Prof. Dr. Robert Weigel, Chair of Electronics Engineering at FAU. He adds, ‘When we applied to the DFG for the research group, FAU and the Berlin Leibniz Institute were the only applicants. The involvement of the other universities is thanks to the successful support for young researchers provided by FAU, as all principle investigators involved in the project today were formerly scientists at FAU, which makes us very proud.’